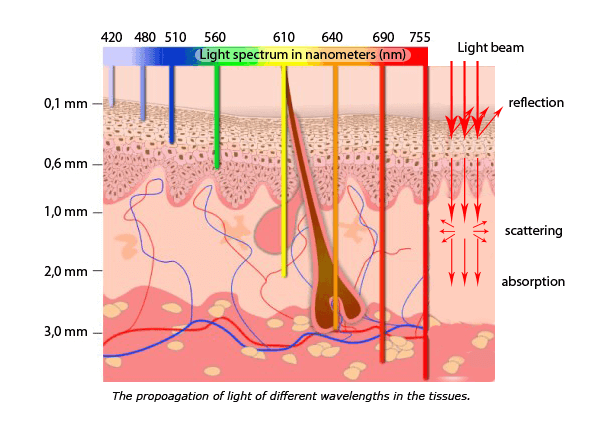 Photons can be absorbed (giving up their energy to matter) or scattered (changing their direction of travel). Light that is scattered back from skin is called reflectance. For a given skin layer, light that passes through it is called transmittance. Scattering is inversely wavelength depen-dent, such that shorter wavelengths are scattered more and longer wavelengths (such as infrared) are scattered less. We are all familiar with these events – black objects become hot when placed in sunlight due to absorption and water droplets (clouds) or crystals (snow) appear bright white because they strongly scatter light, with little or no absorption. Similarly, light is both absorbed and scattered within the skin. Thus, skin layers are cloudy and colored depending on the mix of scattering and absorption. Pen-etration of light into (and beyond) skin is limited by both absorption and scattering. All effects of light on the skin begin with photon absorption, and the molecules that absorb light are called chromophores. Ablative lasers are those that vaporize tissue by rapidly boiling water inside the tissue. It should come as no surprise therefore, that the lasers intended for skin ablation are at wavelengths strongly absorbed by water. Non-ablative lasers do not vaporize tissue. There are many non-ablative lasers in dermatology, some of which are at wavelengths absorbed by water and some of which are absorbed by other chromophores such as melanin and / or hemoglobins.

Laser dosimetry is extremely important for safe and effective results. In order to remove tissue, ablative lasers must raise local tissue temperature beyond the boiling point of 100oC, plus add much more energy needed for changing water into steam. The fundamental unit of energy is a joule (J). It takes 4.2 J to heat 1 cm3 of water by 1oC. In order to vaporize the same 1 cm3 of water, more than 2000 J are required. An ablative laser must deliver about 2500 J of energy per cm3 of vaporized tissue. Not only is a lot of energy required to ablate skin tissue-the energy must be delivered quickly to remove the hot tissue before heat is conducted deeply into the skin, causing a burn. The standard ablative lasers in dermatology are erbium (2940 nm) and CO2 (10 600 nm). The desired interaction of these ablative lasers is to precisely remove a thin layer for resurfacing or narrow column for fractional treatment of skin, leaving behind minimal residual thermal damage. A thin residual thermal damage layer, typically about 0.1 mm, is useful in practice for hemostasis. Minimum residual thermal injury is achieved with ablative lasers by a combination of wavelength, pulse duration, and power density (W/cm2) at the skin surface. A common mistake made by beginning laser users is to ‘turn down’ the power of a surgical CO2 laser in a misguided attempt to exercise caution. Unfortunately, turning down the power can cause burns because the process turns from rapid, precise vaporization with minimal thermal damage to bulk heating of the skin from unwanted residual heat. Fortunately, many of the ablative lasers made specifically for dermatology are designed to stay within a range of dosimetry for rapid tissue ablation, making this scenario less likely. The safest erbium and CO2 lasers are those emitting high power, high energy, and short (less than a few ms) pulses, designed specifically for dermatologic use with minimal residual thermal damage. Despite whatever safeguards an ablative laser may offer, the most reliable safeguard is an ability to recognize the desired and undesired immediate response end points. For example, immediate contraction of the skin is always a sign that substantial thermal injury of the dermis has occurred

Fluence is defined as the energy delivered per unit area of skin, and its units are typically expressed in J/cm2. One can think of fluence as the local ‘dose’ of laser energy applied to skin. Pulse duration (also called pulsewidth, or exposure duration) is simply the time for which laser energy is delivered, expressed in seconds. Power is defined as the rate of energy delivery. Power is measured in watts (W), a familiar unit because of common devices such as light bulbs. One W is defined by 1 W = 1 J/second. A common incandescent light bulb consumes 100 W of electrical power, but emits less than 10 W of light. In contrast, common lasers in dermatology produce 10 to 1 000 000 000 (a billion) W of light power. The Q-switched lasers, which we commonly use to remove tattoos and pigmented lesions, produce more power than a typical nuclear power plant! However, these lasers emit that impressive power for only 10–100 nanoseconds (ns, billionths of a second). Thus, the fluence for treatment of a child with a nevus of Ota using a 10 ns Q-switched laser, and of a child with port-wine stain using a 1 millisecond (ms) pulsed dye laser, can be similar – about 5–10 J/cm2 – but the pulsed dye laser has 100 000 times less power than the Q-switched laser.